I was overwhelmed with the idea of going vegan

If you’ve ever attempted to go vegan or at least thought about it, you’ve probably run into a couple of these roadblocks...

Maybe you’ve gone to the supermarket with every intention of making the shift, only to find yourself staring at the vegan section of your refrigerator aisle confused and frustrated. Or, you made it all the way home with some vegan goodies only to be told by your family “I’m not eating that”. 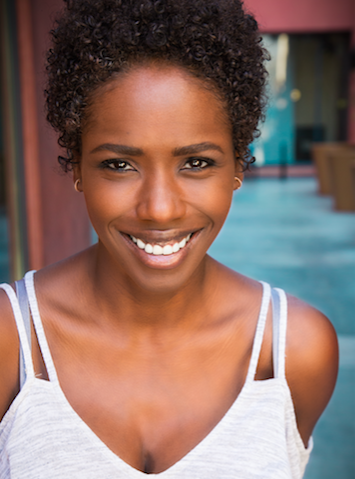 Hi. My name is Porsche Thomas and I am a twin-mom to August and Berlin, lover of food and a celebrity personal vegan chef.

I've made it my mission to help people like you with going vegan, all while maintaining the foods and flavors they love, and without breaking the bank.

I struggled with going vegan for years, and then this happened...

If any of these roadblocks that I mention above apply to you, you’re not alone.

I myself have struggled with all of these things.

I wanted to go vegan for years.

I knew it was better for my health, my body and the planet.

There was never a question as to whether I should do it, only when.

Changing my diet was the hardest thing…

Until one day, I was forced to figure it out.

Let me tell you a story about how I struggled for years to become vegan and how having to go to to the emergency room forced me to finally change my diet...plus, how I learned some surprising tricks that make going vegan super simple.

Many years ago, I had been on a pinkberry bender. Then, one day I got incredibly sick. My stomach cramped and churned. I began to violently throw up. Then I had to use the bathroom. I ate crackers and drank ginger ale for days to let my stomach heal. Once I began to feel better, I made plans to go out. While out, I ordered truffle mac and cheese, and while eating it, began to feel that feeling in my stomach again.

A few days later, I ordered chicken fingers which came with ranch for dipping which made me start to experience that feeling in my stomach again. I went straight to my car to head home, but had to pull over several times on the way home, flinging my car door open to throw up.

That’s when I made the connection. I was lactose intolerant. This was quickly confirmed by my gastroenterologist. I was devastated. How could this happen like that? And so suddenly?

For a while I was able to still eat dairy with a lactose pill, settling for minimal discomfort. After some time though, that comfort began to diminish as the pill began to lose its effect on me.

That’s when I knew I had to make a serious change.

How being vegan became easy...

I had to give up dairy, which forced me to learn how to live without the foods I loved and was used to.

It wasn’t easy at first. I’ve had some super tasteless vegan food. I’ve grabbed a banana while rushing out of the house thinking, at least it’s vegan, but was only able to do that so many times before thinking “If I see one more doggone banana”. I’ve stared at the rows and rows of tofu at the supermarket, thinking, what do I even do with that? I too, have had friends pass up on coming over for dinner after mentioning that the food would be vegan.

I wanted to make it easy. Fun.

I learned what to do in the moments when you crave meat. How to deal with family members who try to question your decision. But most importantly, I learned to make a lifestyle shift where at this point I don’t even miss meat anymore. Now, it’s easy for me to be vegan.

Do you know what some of the AMAZING benefits are of being vegan?

Once I committed to going vegan, it wasn’t long before I could feel the benefits:

Not only did I manage to make the shift and even enjoy eating vegan and feel better… throughout this process, I also figured out some tricks that made even my meat loving friends want to come to my dinner parties.

I’m serious. This is a photo of my yearly vegan Thanksgiving dinner: 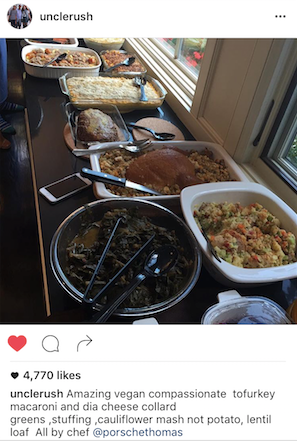 Now, I’ve learned all of this the hard way and I struggled for the longest time making the transition.

And I know for a fact that I'm not alone in this struggle.

Do you get confused about what to eat and what not to eat? Then, read on...

If you find you’re having a hard time making the shift and going vegan let me tell you...

It’s not your fault!

Here’s the thing. Figuring out how to eat healthy amongst the overload of information that’s out there is actually more difficult than ever before.

With all the documentaries telling you to go vegan, and all the advertisements telling you milk does a body good, it all gets very confusing.

There’s so much information out there about veganism and about what is healthy and what isn’t, that it’s completely overwhelming. So it’s not your fault that you might be having a hard time, it’s just a product of what’s going on in the world right now.

Luckily, there’s hope. I’ve narrowed down a handful of concepts and tricks, that if you stick to, going vegan (and overall eating more healthily) can be incredibly simple.

The only 2 things you need to learn to make going vegan super simple...

Essentially, there are only two main things you need to master to make going vegan dead simple without ever having the feeling that you’re missing something, or that it’s ‘hard’.

Learn from someone who's done it

I’ve experienced a lot of your struggles, and through those struggles, I’ve learned so much. I tried to manage my discomfort only to realize I was much happier once I completely eliminated the foods that made me uncomfortable and sick from my diet. I’ve tried many of the products on the market and I’ve experimented with so many different styles of food. I’ve spent years learning and figuring out how to continue to eat the foods that I love while enjoying a plant-based diet.

This unique approach to veganism led me to become Russell Simmons personal chef, and has allowed me to cook for other celebs alike, making food that’s the same comfort foods my clients have always loved without sacrificing much of that taste they’ve come to expect from those dishes. I also host a monthly vegan soul food pop-up restaurant in downtown LA where vegans and non-vegans alike enjoy a Compassionate Soul Food dinner. Not only do I work as a chef creating these soulful meals that I’ve come to be known for, I also stock the fridges and pantries of many of my clients, forcing me to keep up with the newest trends and products.

And with this, I’ve created the perfect system for you.

A three part online course teaching you how to become vegan, making it as simple as possible.

In this course, I’ll give you the tips you need to to begin and maintain a vegan diet without that feeling of confusion.

This course is for you, if:

This course is probably not for you if:

Why get this course?

I’ve created a resource where you can learn all the basics of incorporating a vegan diet into your lifestyle without the anxiety and confusion that comes with all of the conflicting information out there. If you’ve already made the decision to go vegan, this course will help you do it with ease.

Additionally, with a Facebook group for only course members, you'll have support and a community to share your journey with.

When does the course start and finish?
The course starts now and never ends! It is a completely self-paced online course - you decide when you start and when you finish.
How long do I have access to the course?
How does lifetime access sound? After enrolling, you have unlimited access to this course for as long as you like - across any and all devices you own.
What if I am unhappy with the course?
We would never want you to be unhappy! If you are unsatisfied with your purchase, contact us in the first 30 days and we will give you a full refund.